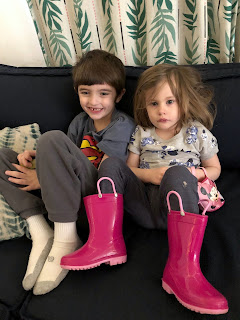 B. His Size – He's wearing size 7 clothes and size 1.5 shoes. His feet are unfortunately wide so he has a hard time finding comfortable shoes. He uses Crocs on most days.
C. His Personality – He's somewhat of a difficult kid to parent. He likes very few things... He doesn't like going for walks, playing soccer or other physical activities. He doesn't like most art projects. He doesn't like most foods, including all meat except bacon, all vegetables except carrots, etc.
D. His Favorite Things
E. Things He Does Not Like – When he needs quiet time but doesn't get it.
F. What He’s Thinking About – He seems to spend a lot of time thinking about superpowers.
G. Surprises – I'm surprised that even things he used to like, he seems to no longer like. From cherry tomatoes to creating art.
H. Best & Worst Things –
I. Family and Friends – It's been a year since Covid broke out. We've seen far fewer friends than usual. Honestly, I don't think he's minded. He's kind of a shy kid. Even when his brother is playing with children in our neighborhood, he usually doesn't want to join in.
J. Parenting or What I’m Doing Differently – He's my first kid so I'd say my parenting of him is sort of a mess of trial by error. I honestly don't know what to do other than to listen to him and to try to do things fairly.
Posted by Jessvii