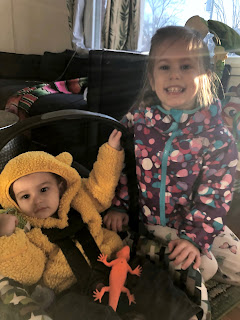 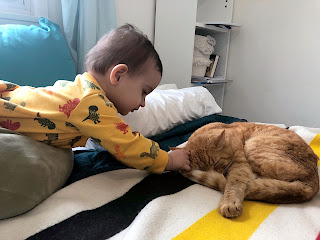 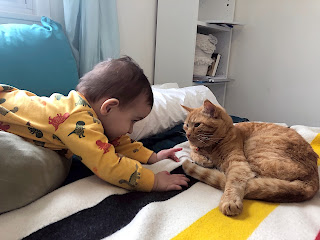 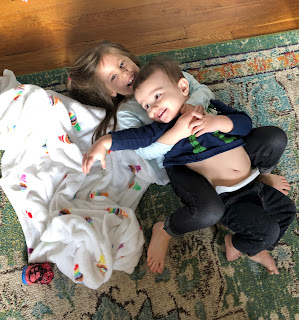 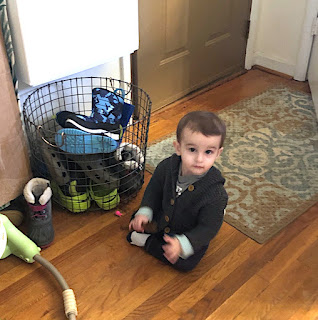 A. His Schedule – He usually wakes up at around 7 a.m. and goes to sleep for the night around 7 p.m. (later on lazy days, and earlier on more hurried days or daycare days). He takes a morning nap at about 10 a.m.

B. His Size – He's wearing size 18-month clothes and size 6 shoes. Currently, he's wearing size 4 Pampers.
C. His Personality – He is a charming, smiley baby. As long as he is well-fed and well-rested, he's irresistibly content. We affectionately nicknamed him "the Chonker" because he's a chunky baby who is pretty large for his age.
D. His Favorite Things
E. Things He Does Not Like – When his sister turns on the light and keeps him awake by talking and singing (they share a bedroom and he values his sleep far more than she does).
F. What He’s Thinking About – Despite being pint-sized, he really wants to be included in whatever his family is doing.
G. Surprises – He's such a sweet baby! I am surprised at how well he and his oldest brother and sister get along. They all really gel well together without a lot of competition or jealously.
H. Best & Worst Things –
I. Family and Friends – My mom seems to really have a special bond with the Chonker, perhaps because the Chonker looks the most similar to me at this age? Or perhaps it's because he's so well-behaved? My middle children are frequently bouncing off the walls, but my oldest and the Chonker are pretty mellow by comparison.
J. Parenting or What I’m Doing Differently – Given the pandemic is still ongoing, the Chonker has had a somewhat sheltered existence as he doesn't get to go to many places or see crowds. I think I am at the apex of my parenting journey as I am more patient than I have ever been, and thanks to not having to commute to work because of teleworking, I am the least exhausted and the most present.
K. Milestones – He can't walk yet but he's getting so close.
Posted by Jess