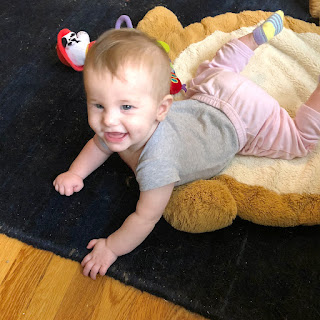 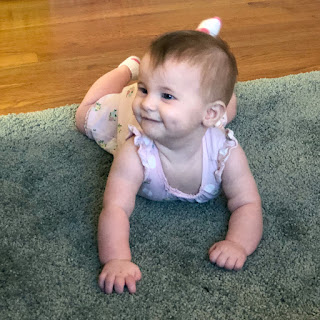 Surprises
If I’m being completely honest, I was somewhat apprehensive about having a daughter – I didn’t know what to expect. But, it’s been wonderful – much better than expected. She’s such a joy to be around, and is such a happy baby. She’s willing to smile at everyone and is just the sweetest!

The Best Things
I feel an almost magnetic attraction between Rosiebebe and myself. I just love being around her, and I think it helps that at this point in my life, I’m more confident in my childcare-providing skills.

The Worst Thing
It’s still pumping. Breastfeeding is hard. I have read articles that suggest that breastfeeding isn’t actually any healthier for the baby than formula, and I fear they’re right, and that I’m doing all of this for nothing. But I also remember how much Serious Kiddo threw up / spit up as a baby, and how grumpy he was most of the time, and if there’s any chance that it was due to formula, then I don’t want to risk that for Rosiebebe. I have been travelling both for work and to see family, and pumping makes that much more difficult.

Her Size
At her five-month appointment almost a month ago, she weighed 5 lbs. 6 oz. (58th percentile) and was 27 inches tall (97th percentile). She has long legs! Her head circumference was 16 1/2 inches (63rd percentile).

Her Favorite Things
She loves feeling the texture of things, from her wood-paneled bedroom walls, to wicker, to our sofa cushions. She likes listening to the sounds things make when she scratches them with her nails. Her favorite toy is currently her moose teether, but she also likes her jumperoo. She has stopped using pacifiers, although sometimes she'll suck her thumb or even her entire hand.

What’s Different This Time Around
I would say that I’ve become more of an actual minimalist, not just an aspiring one, and as such we have less baby stuff around, from clothes to toys. This time around we also have less money due to some unrelated job matters, so we’ve got to be more careful about how we spend our money. And of course, another big difference this time around is that we’re in a different, smaller house than before.

What’s the Same
It’s mom guilt – no matter what I do or how I do it, I’ll always feel mom guilt that I could or should be doing more. I also feel like people are constantly judging me – am I too hands-off as a parent, or not hands-on enough? Was three kids too many? I don’t think so, but even my own parents think it was.
Posted by Jessvii