He is Actually Five?! 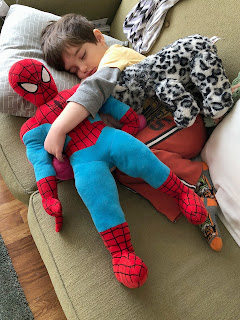 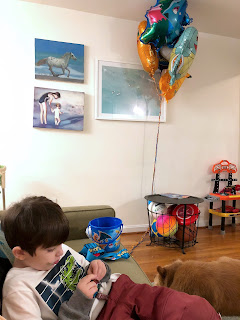 My Serious Kiddo is now half of a decade old!

A. His Schedule – On the weekends, he tries to get up before everyone else so that he can watch his YoutTube shows in peace, without us trying to limit his screen time, or his brother trying to dictate which show to watch.  One thing we’ve been trying to do recently, with great success, has been to limit his screen time.  The results are that he’s actually more content (less bickering with his brother) and plays with his toys more.

B. His Size – He seems to be of average size.

C. His Personality – He seems to be an introvert – he likes people but he needs periods of quiet time to recharge (his brother is the opposite – Bear loves attention and being in the middle of a party!).  He is also kind of bossy.  One thing he can’t stand is to lose a game – we need to work on his sportsmanship skills.

F. What He’s Thinking About

G. Surprises – I’m surprised that he has a somewhat adversarial relationship with my husband – their personalities are not very similar, or so it seems to me, and this inherently creates conflict and a lack of mutual understanding – so much for “like father, like son.”

H. The Best Things – For me, I’m happiest when my Serious Kid is doing something that I also like doing, like flipping through the IKEA catalog.

I. Family and Friends – He still remains close with my mom, and less so with my dad. He seems to have made friends at his new daycare, which is a relief to me, and he has maintained his friendships with the kids across the street and with his closest friends from his old daycares.

J. Parenting – One new things I’m trying very hard to do is to institute a seven-minute cleanup time ritual at night – the hardest part (other than keeping the kids on task) is getting my husband and my mom (when she’s at our house) to buy into it – they are so reluctant! But I do think that a tidy house is almost essential for my mental health, and it’s so much easier to accomplish bit by bit each day than doing a marathon cleaning session a few times a year.

As mentioned above, I’m also trying to limit the kids’ screen time.  It’s not that I’m worried that what they’re watching will corrupt them – it’s more so that I think we all need more space and time to actively do things, rather than just passively watching things happen on TV.  I thought it would require more parental attention and engagement from us to make this switch, but it’s honestly not any more work than when the kids were watching a lot more TV.  They do find things to amuse themselves with, and are spending more time talking and connecting with us and each other.