Couple of Birds Sitting on a Branch (Cross Stitch) 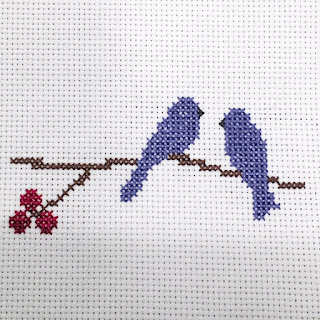 This is a pair of birds perching on a branch with three red berries. Note that the beaks are each made with two half-stitches. Be sure to "catch" your longer diagonal stitch with your shorter stitch (the one that goes into the middle of a square) or else your beak won't look tight and crisp (it will look rounded / bulbous). There is also one half-stitch randomly towards the mid-bottom of the left bird.