Here's my minimalist take on Halloween that hopefully makes it simpler for you!

What I Avoid: Letting my kids pick whatever costume they want, and doing a family theme.

The Problem with "Choosing Anything" One year, my child picked a very obscure animated movie character, so there was no ready-made kit to buy. I scoured the internet as well as brick-and-mortar stores for the items to assemble this costume myself. Of course no one knew who my child was dressed up as. But the biggest problem was that for all the time and effort I spent on this endeavor, my child doesn't even remember the costume (he barely remembers the movie that inspired it). Not to mention that there is no chance any of my other children will want to re-use this costume, if it even fits them during autumn time.

The Problem with Group-Style Costumes Another year, we tried (in vain) to do "Ghostbusters" as a family. But I couldn't find a costume in my daughter's size. And I couldn't find a ready-made Jeanne costume for myself (from the animated series). And I couldn't find a Slimer costume for the dog. And I can't sew. And then Halloween got cancelled anyway because this was 2020. I have the same problem with "family pajama" photoshoots - it is very difficult to find one thing that comes in everyone's individual size, is affordable, and is equally liked by everyone.

How this Can Work:

Itemize It Say you want to do a Disney's Elsa costume. Yes, you could just buy that ready-made, and I would support that instead of making one yourself (unless you love making costumes). But, you could also buy the following items: plain blue dress, cloak, blue gloves, blue shoes, and kids' costume jewelry. You could then re-use the dress and some of the other items as part of your child's regular or dress-up / costume-play wardrobes. In that case of the jewelry, you could save a couple pieces and give away the rest either as Halloween treats or to your children's' friends. 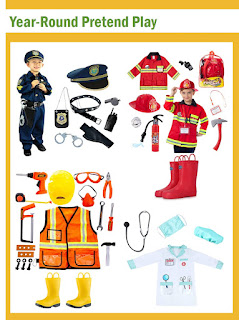 Year-Round Pretend-Play Melissa and Doug do a lot of this sort of generic costume which could totally be worn on Halloween, as well as year-round as part of a costume trunk. These types of costumes also work really well in terms of handing them down from one child to the next, and the sizing is typically generous / loose-fitting enough to wear for more than a single Halloween. Here are some good ones: a doctor costume, a firefighter costume, a police officer costume, and a construction worker costume. You can add everyday wardrobe items to these costumes, such as red rain boots for the firefighter or yellow rain boots for the construction worker.

What I Avoid: Long, tiring walks hunting for candy with special-purpose buckets.

The Problem with the Seemingly "Endless" Trick-or-Treat Walk One year, I had two of my young children with me. The youngest was too young to walk the whole thing, but quite heavy for me to carry. The other tired easily, even before his candy bucket got heavy. Not to mention that trick-or-treating happens at night, usually after a long day of work and/or school / daycare.

Get a Wagon I bring a wagon that the children can ride in when they get tired. It also doubles as a way to haul their candy loot and any costume props or masks that the children tire of holding on to themselves. This wagon is also great for everyday neighborhood walks, going to the zoo, or going to the beach, etc. to haul either children, toys, or snacks (or all three).

Get Some Boring Buckets I also give the children plain buckets for their candy instead of traditional Halloween buckets, as the plain ones can be re-used throughout the year for other events like Easter or a Treasure Hunt, or even for cleaning or organizing.

Curtail the Walk I also limit our route to only a couple of streets, then return home. Waiting at home, I have a bag of the children's favorite candy to supplement their haul. In our area, you sometimes walk down an entire street where not only are none of the house participating, but the homes don't do the courtesy of turning off their porch light, so the child walks all the way to the door only to be met with disappointment. Other homes have jarringly spooky yard decorations, always a worry for more sensitive children.

What I Avoid: I do not enjoy food prep, so never again will I make all of the cute Pinterest Halloween foods. I also don't have a lot of storage space, so I try to have my Halloween décor be all consumables / disposables. I will also forgo structured kids' activities.

The Problem with Cute Halloween Foods Kids are usually not adventurous eaters. One year for a Halloween-themed kids' party, I made "spider" sandwiches, "bone" snacks, string cheese "ghosts," and a "pumpkin" cheese ball. Do you know what the kids wanted to eat instead? Chips. Lots and lots of chips.

The Problem with Unique Halloween Foods One year, a friend created "black" chicken wings (similar). In addition to the dye being a bit purple or green in some places, and people's bowel movements being strange colors following the event, and the food dye being somewhat costly in order to buy it in the quantities that were needed, many guests simply found the food too weird to eat, so they didn't even try it.

The Problem with Perennial Décor I personally do not have the space to store bulky Halloween décor the other eleven months of the year. One year, we bought a wooden scarecrow decoration (similar) for our yard. The next three years, I either forgot it existed or forgot where we'd stowed it. Eventually, the sign got bent and rusty and we discarded it.

The Problem with Structured Activities Kids like to do things on their own terms. Want to have a relay race at your party? I've tried an failed. Want to have the kids play a Halloweeny tic-tac-toe game with spider game pieces? Yeah, the kids just ignored it. Want to have the kids craft their own spiders? This "fun" kit was not too fun (the pieces were hard to pop out). But my least fun idea, judging by how much the kids ignored it, seemed to be my printed off Halloween word searches. The problem with all of these activities is that they were too rigid.

Do Ordinary Party Food If cooking is your jam, go ahead and get creative, but I personally am sticking to ordinary party food: chips, juice, carrot sticks, cheese pizza, etc.

Do Consumable / Disposable Décor If you're okay with disposable serving ware, buy some themed plates or napkins. If you do a solid color such as orange for your serving ware then you can use them for the entire fall, such as for Thanksgiving. If you're okay with balloons, buy some Halloween balloons. One year, I paid a Party Store to fill my balloons with helium, but it only lasted 24 hours; I now just blow them up at home with ordinary air. My easiest and cheapest decorating trick is to just buy some solid-color bring crepe paper and tape it to the walls or ceiling.

Do an "Easter" Egg Hunt But temporary Halloween tattoos were somewhat interesting to the kids. And a really big hit was a Halloween-themed egg hunt - it's just like an Easter egg hunt where the eggs are filled with candy, but I used black plastic "Easter" eggs.

Do an Open-Ended Activity Table This could be you supplying random craft supplies in Halloweeny colors, or paper and Halloweeny stickers, and letting the kids make their own thing at your "Craft Table." Or, you could supply cookie or cupcake decorating items (e.g. Halloween sprinkles) at your "Decorating Table." The point is that the kids can approach this type of activity on their terms.