The Bear is Turning Three!

A. His Schedule – We try to put him to bed at 8 a.m., but he has a lot of energy, and it’s doubly hard to get him to fall asleep when he and his brother are sleeping in the same room, because they keep each other up. The boys now share a bedroom, although one of them will sometimes sleep in our room, which is a treat for them, and also helps ensure that they actually do fall asleep at a decent hour. He usually wakes up on his own around 6:30 a.m. Although he takes an afternoon nap at school, it is quite difficult to get him to take one at home, and sometimes we give up. His favorite thing to do when the days are long and bright (yay summer!) is to go across the street and ask if Nina can come play. She’s around six years old, and we think Bear may have a crush on her. Then again, she’s a nice kid, so maybe that’s why he’s so crazy about spending time with her.

B. His Size – He is an even 30 pounds. He’s still pretty skinny (but not un-healthfully so) but he grew around 5 inches taller this past year. He’s now tall enough to ride things at places like county fairs.

C. His Personality – Bear is easy to love but very hard to handle. He’s cuddly and loving and can be so sweet. He’s got a great sense of humor too. He’ll put on a mask to try and get us to laugh, or try to make a joke, etc. However, he’s also very stubborn, and can get very mad at us if we don’t give him what he wants. When he’s upset, he’ll say things like “I’ll never be your friend again!” He’s a difficult kid to watch because he’s always getting into something – something dangerous, or messy, or destructive, or a combination thereof. He’s not completely fearless, but he’s close. 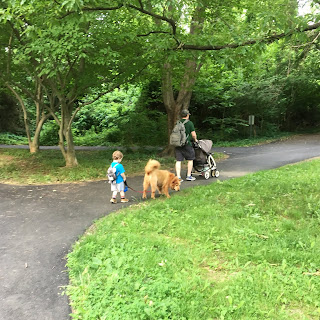 
F. What He’s Thinking About 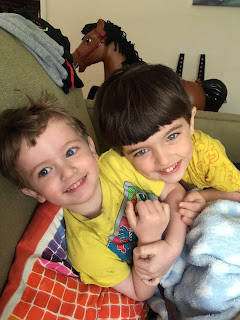 G. Surprises – I’m somewhat surprised that he’s almost the same size as his older brother, even though they’re 21 months apart. I’m also surprised that there’s so much of my husband in him. The only thing about him that reminds me of myself is that he has pretty good fine motor skills, and has an interest in art.

H. The Best Things – Life with Bear is complicated. Sometimes, he can be so hard to handle, and so indifferent to my feelings or the feelings of others. But other times, he can be phenomenally cute and caring.

I. Family and Friends – Bear had a great time in New England recently playing with his cousins. He also really enjoyed the company of Aunt Denise.

J. What I’m Doing Differently This Time Around – I can’t say that I’m doing anything differently with Bear than I did with his brother, except possibly that I’m putting more effort into allowing both boys’ friendships with other kids to develop. It takes effort to make sure that they’re forming friendships outside of daycare, but it’s worth it.
Posted by Jessvii