And Now, A Baby Girl 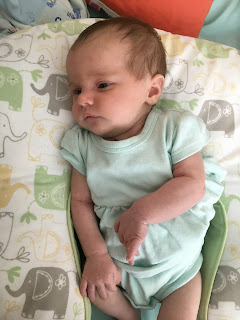 This spring, I had a baby girl, Rosiebebe (not her legal name).

Being Pregnant
Unlike my previous pregnancies, I was waddling around for the last couple months of her pregnancy. I thought it was because she’d be heavier than the boys. As it later turned out, she was actually lighter than the boys, although she was the longest. She also was quite forceful with her kicking, which make it difficult for me to sleep. I was very surprised when, at around 22 weeks, we found out that this baby was a girl. I experienced some gender disappointment, although that melted away by the time we left the hospital with her.

Her Birth Story
It went better than I expected it to go. At about 9 p.m., I had my first contraction. I went to bed like usual around 10:30 p.m. but I woke up around 1:30 a.m. with more contractions. I did some freelance writing work while things progressed, and called my mom over around 3:30 a.m. so that she could watch the boys while I’d be at the hospital. At about 5:15 a.m., I put down my computer and decided that it was time to get ready to go to the hospital. A funny thing happened – my husband accidentally parked near the wrong hospital building, so we awkwardly made our way to the correct building while I held my pregnant belly in my arms and lucked out by not having any bad contractions while we scooted over to the right place. At about 6:15 a.m. we checked into the hospital. My contractions were never consistent in terms of duration, severity, or frequency. The nurse asked if I’d like a rocking chair since I was doing natural childbirth, and I found that offer very sweet but also kind of silly. I just couldn’t imagine laboring like that. I noticed that the TV in the room was already on and was playing a rerun of the show The Nanny. I also found that kind of odd, and asked my husband to switch it off so that I could focus. My water broke at the hospital while I was laying down. When the pain of the contractions felt unbearable, I decided it was time to push. At 7:53 a.m., this baby was born. It hurt more than Bear's birth, but at least the labor didn’t last long. For the first few minutes of her life, I was mad at her for causing me so much pain, but by the time we checked out of the hospital two days later, I could not be more smitten with her. It took us more than a day to decide on her name, but in the end, she didn’t look like a “Janet” or an “Ember,” and “Violet” sounded more and more like “violent” to me, and Serious Kiddo preferred the name we actually chose to “Penelope.” Serious Kiddo visited us in the hospital, but Bear had to stay home because he was sick. I like that her name is short and to the point, and sweet but not too sweet. I also like that Serious Kiddo was able to help.

Her Personality
She is what I’d call a “good baby” – she sleeps well throughout the night, she’s very mellow, and very reasonable – she doesn’t cry for no reason, and she’ll generally be patient if she knows you’re trying to fix the problem. She learned how to smile relatively quickly, and she’s more than willing to flash you a cheerful smile. She’s very expressive with her feet – stomping them when she’s upset, or kicking them outward when she’s happy. In new situations, or when people she doesn’t know well are fawning over her, she calmly places her hands together. Her reservedness reminds me of myself.
Breastfeeding
I’m exclusively pumping. It’s hard. Renting a hospital-grade pump for home-use has been helpful. I do not enjoy pumping. Because pumping is not as efficient as directly breastfeeding, I’m losing a lot of time during my day to pumping. I pump at least five times a day, and for at least 25 minutes each time, though some of my power-pump sessions last up to 1 hour 10 minutes.

My Parents
They both love holding the baby. My mom says that she thinks the baby looks like me, and I don't disagree.

How I’m Feeling
Overall, I’m feeling pretty good. I’m thankful that my body was able to create this wonderful, healthy baby. I’m grateful that we’ve been able to expand our family to three children. I’m relieved that her labor and delivery went so well. Even though pumping is very unpleasant, I’m thankful that my body is able to make milk for her. I worry about her while she’s in daycare – I wish there was a way to watch her every moment of the day. 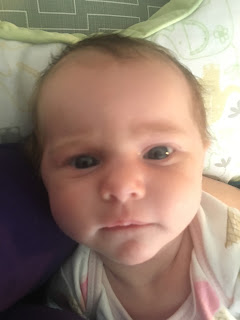 The Best Thing About Right Now
One of the best things about right now is that I’m surprised with how much I love having a girl. Having had only boys up to this point, I really didn’t know what to expect. Having boys is great, but it’s a relief to know that having a girl is also great.